Brahmagiri Trek - A Tryst with Nature..

( OTHER BLOGS ARE AT END OF THIS PAGE) 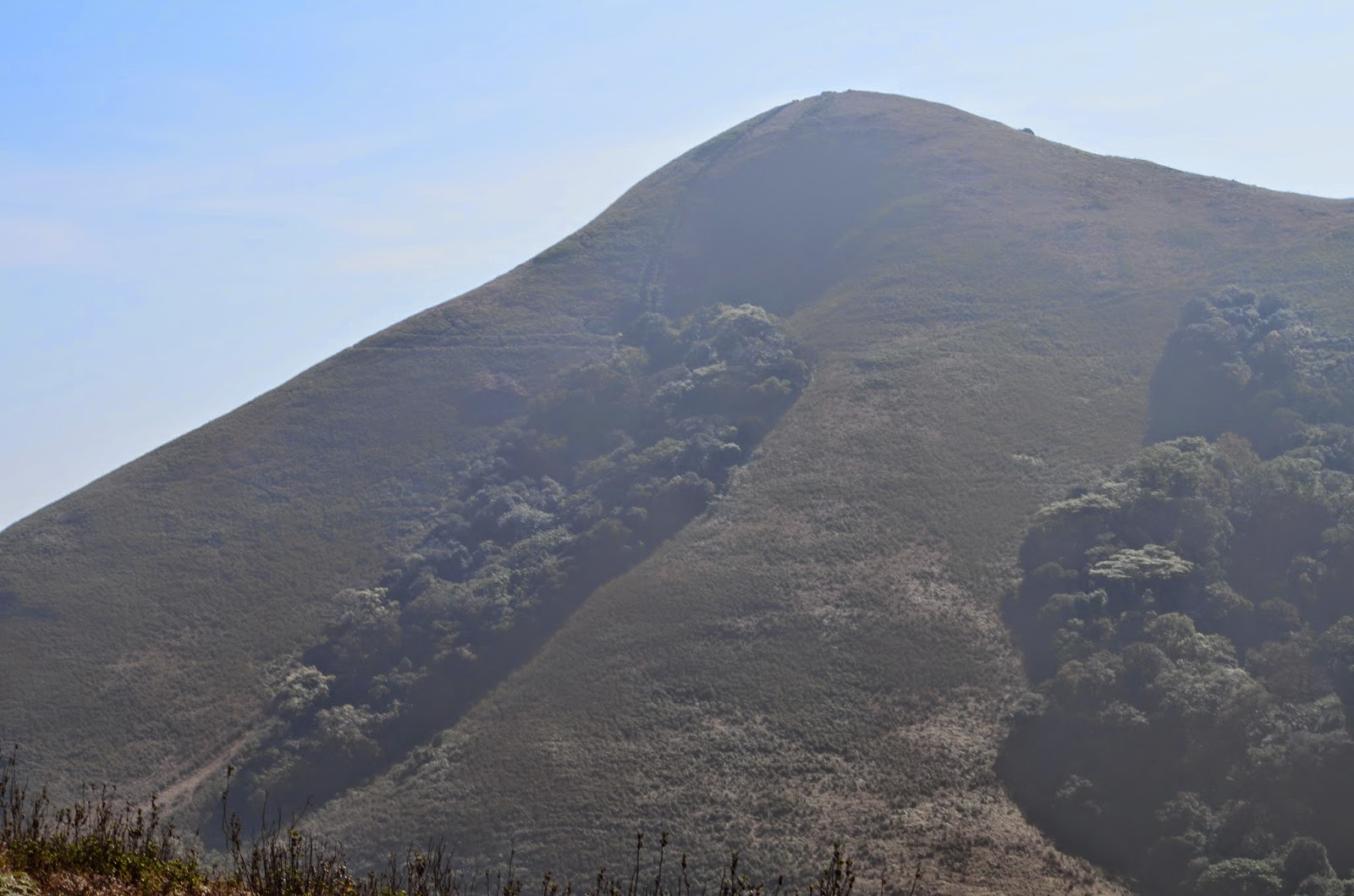 After much discussions about various places like Mullayangiri, Kumarparata, Chembra, Kodachadri,, We finally zeroed on Brahmagiri hills this time. With everyone agreeing on place, we,6 of us, scaled mountain this week end.

Located in Kodagu district, Brahmagiri peak stands at height of 1608 Mts. The mountain chains support ample wildlife within the sholas and open grasslands, especially elephants and sambars, which are common sighting here.You can climb the peak from Karnataka or from Kerala side. If you are trekking from Karnataka then permission must be taken at Srimangala,Kodagu District, whilst permission must be taken at Thirunelli if trekking is from Kerala side. We trekked from Karnataka side..
On reaching Srimangala we need to proceed to Irupu falls, where trekking begins. Distance from Srimangala to Irupu is about 8 kms, connectivity to Irupu falls is not soo good, its better you hire a auto or any private vehicle to drop and also pick you from falls once the trek is completed. Autos can be hired from Srimangala.

Our plan was to scale half of the  mountain on first day and stay at "Narimale" guest house in middle of forest and Climb the remaining distance and come down the second day. We had our own vehicle, thus travelling over night we reached srimangala via Nagarhole road at 9Am. We went straight to forest office, who redirected us to the IB, where we freshened up. IB and forest office are in same compound. Al tough, IB belongs to PWD, it can be used by tourists by paying a nominal rate. It has a decent bathroom..Thus we freshened ourselves, and went to forest office to get permission letter. The staff were friendly to guide us regarding the trek route and also gave detailed information about the place. we paid all the necessary charges(Entry fees, guide fees, and staying charges at "Narimale"), got a receipt for the same and moved towards Irupu falls to  start our trek. Permission and guide are a must, don't attempt without both of them.
We now moved towards Irupu falls where the trek starts, here we met our guide, Praveen,a forest watcher, who was waiting for us near the falls. Once the receipt is obtained then a guide is assigned to us. So it is important that we obtain permission. We showed our guide the receipt and thus our trek started at 11.00 Am. Guide was a very silent and a friendly guy with enough experience about forest. He was never tired of answering our various questions.
The trek path is via shola forest and grassland, so there is a bit of climbing to do till the guest house. Since we were climbing only till the "Narimale" guest house for the day, we followed a slow pace,taking break many times. There are two water points from base till the guest house, so water must not be a problem. we refilled our bottles at both these points. At second water point, it was sad to see soo many plastic covers and bottles  littered around by careless tourist, which were patiently picked up by our guide who carried them till the dustbin at guesthouse. It is shear dedication of these staff, which have kept these mountains clean and full of wildlife... As a tourist even we need to act responsibly and enjoy the nature without disturbing its tranquility.

Thus taking breaks, stopping at water points, we reached our destination for the day, "Narimale" guest house, at  3PM. Distance from base till guesthouse is about 4 to 4.5Km and it generally takes around 2.5 to 3.5 hours to trek the same.. Since we had people who were trekking for first time, it took us a bit more time. .

Regarding the "Narimale" guest house which means "Tiger hills", it is a  3 room building in middle of forest with a toilet and a bathroom,which is decent enough to use. It can accommodate some 25-30 people at a time. Guest house has all kinds of utensils however the required grocery must be carried along, which you intend to cook. A river stream flows near by from where water must be fetched. Also we need to collect dry sticks which serve as fuel for cooking. We had carried rice, dal, sugar,lemon, tea powder, salt etc to cater the need of nearly 8 people which would sustain us for 2 days. Carry even bed sheets and mattress to sleep upon.Solar fencing is provided on all four sides, so no fear from wild animals..Since there were no other tourists on the day we visited, it was a bonus for us..

Thus we fetched water ,wood and freshened ourselves.. There was still some time for sun to sink so our guide took us to a near by spot from where we could sight some animals. Climbing very small hillock we reached the viewpoint from where we had excellent view of vast grasslands and dense sholas. The place was dead silent without any disturbance. I can barely remember when was the last time i heard such a silence. I loved the place, sitting quietly we could hear sambar,elephant, jackals,
but none were visible..we sat there about an hour without any sightings. Sitting in such a secluded
place, without any noise accept occasional sound of wild animals  itself is a wonderful feeling. None  of us were willing to leave the place and move back, but mist started engulfing the entire
surrounding, and our guide told us that its time we leave before sun goes down.
Halfheartedly we started moving towards our guest house and to our luck a lone elephant and a lone sambar were sighted, both at far distances. Sambar ran away immediately on seeing us, while elephant was at very long distance to be bothered of us! It was wonderful to sight these animals who manage to stay atop these mountains without anybody's disturbance. Finally the sun went down, watching sunset was too an awesome sight. We managed to reach our guesthouse before it became dark. Wandering in dark could be a very risky, as place of full of wild animals especially elephants.
Preparing our dinner with the grocery we carried, we had our night dinner, and thus day 1 ended...
It can get too cold at night, so don't forget to carry enough clothes to keep yourself warm.  It is advisable to carry mattress, and torch along. There is a small solar powered light for the entire building, which provides enough light at night.

Next day morning tough we were ready by 7 Am, dense mist delayed our start by 2 hours.Guide was not sure that he would see any animals in such thick blanket of fog at safe distance, which could be dangerous. Finally fog started to lift and we left the guest house to start our trek at 9Am. Morning is the best time to sight wild animals in any terrain. We were instructed by our guide to remain silent as far as possible which would increase our chances of sighting animals. It was some 30 mins into the start and there!!.. Magnificent bull gaur in prime age was spotted.He probably had come in open to graze.. It was such a huge size animal with lethal horns. Without disturbing, we watched bull gaur nearly for 10 mins before he vanished into the sholas.Awesome sighting.. We moved on to see sambars again and again, but out of reach of our cameras..

Distance from Guest house till Brahmagiri Peak is about 6 km, and it takes 2 hours to trek the same. since most of this path is via open grasslands without much ascend or descend, we can cover this distance a lot quicker. Again there are two water points in between,so no need to worry about water.

We finally reached base of actual  Brahmagiri hill after 2 hours of trekking. Looking from bottom of mountain to its top may give jittery feel to some as it is nearly at 70 degree inclination.But good thing is, none of us refused to climb and we all started scaling peak, finally post many brakes and stops we reached   "Brahmagiri peak" after 45 mins. It was a wonderful feeling, the peak itself is divided between Karnataka and Kerala. Demarcation lines which run along the entire area can be clearly seen.. From the  peak we can see a temple on Kerala side. Climbing peak may be challenging for some, but yes, the path we traverse to reach this place is worth the strain.Climbing peak could be challenging task in rainy season as legs may slip due to damp soil.

At top,we had  light snacks which was carried along. Since there are no trees on top which would provide you with cool shade, we started feeling intensity of sun and decided to scale down after spending nearly an hour on top of mountain. I was amazed to see elephant dungs even on top of peaks, it was interesting to imagine how elephants could climb such a steep mountain.

As always, it was easier to move down and we reached our guest house within 2 hours where we had our lunch. Packing our luggage we left for the base. It took us some 1.5 hours to climb down from guest house to base where our vehicle was parked. Coming down, we thus reached our vechicle near Irupu falls, at  4.30 pm and waved off praveen, who was excellent and friendly guide. And started our journey back to home.
One can trek the the entire route in one day without staying at the guest house and come back the same day, provided you start early, but it will be too much tiring i guess as you've to walk a lot. Our plan to trek for 2 days came handy as none of us were much tired and went to office/college the next day without any body pains.. And there are absolutely no vehicle routes to reach the peak only method to reach the same is by walk. The difficulty of trek could be termed as moderate one, which is not so difficult. But the place would be infested with leeches in rainy season, so take care. Permission to Munical caves has been stopped.


Trekking in sholas and open grasslands was a new experience for me.. The astounding silence in the entire area will definitely ring in my ears for a long time...

Quick Checks :-
1.  Brahmagiri forest is located in Kodagu districti, Virajpet taluk.
2.  Trekking can be done from both Karnataka and Kerala.
3.  Permission and guide are mandatory.
4.  Permission to be obtained from Srimangala if trek is from karnataka side, else at Thirunelli if trek is from Kerala Side. Nominal amount is to be paid for trek,guide and accommodation
5. "Narimale"guest house is in between the trek route, with decent accommodation. It has all utensils but you must carry the required grocery to cook.
6.  Takes about 2.5 to 3.5 hours to trek 5km from base till the guest house.
7.  From guest house the Peak is about 6 km.
8. Four water points from base till the peak, so need not worry about water.
10.Best time to visit would be post monsoons(No leeech problem).
11. Permission to trek during heavy rains and late summers can be denied so confirm your trekking at forest office before start, Srimangala office No :-08274-246331
12. Please be a responsible tourist and don't litter around. 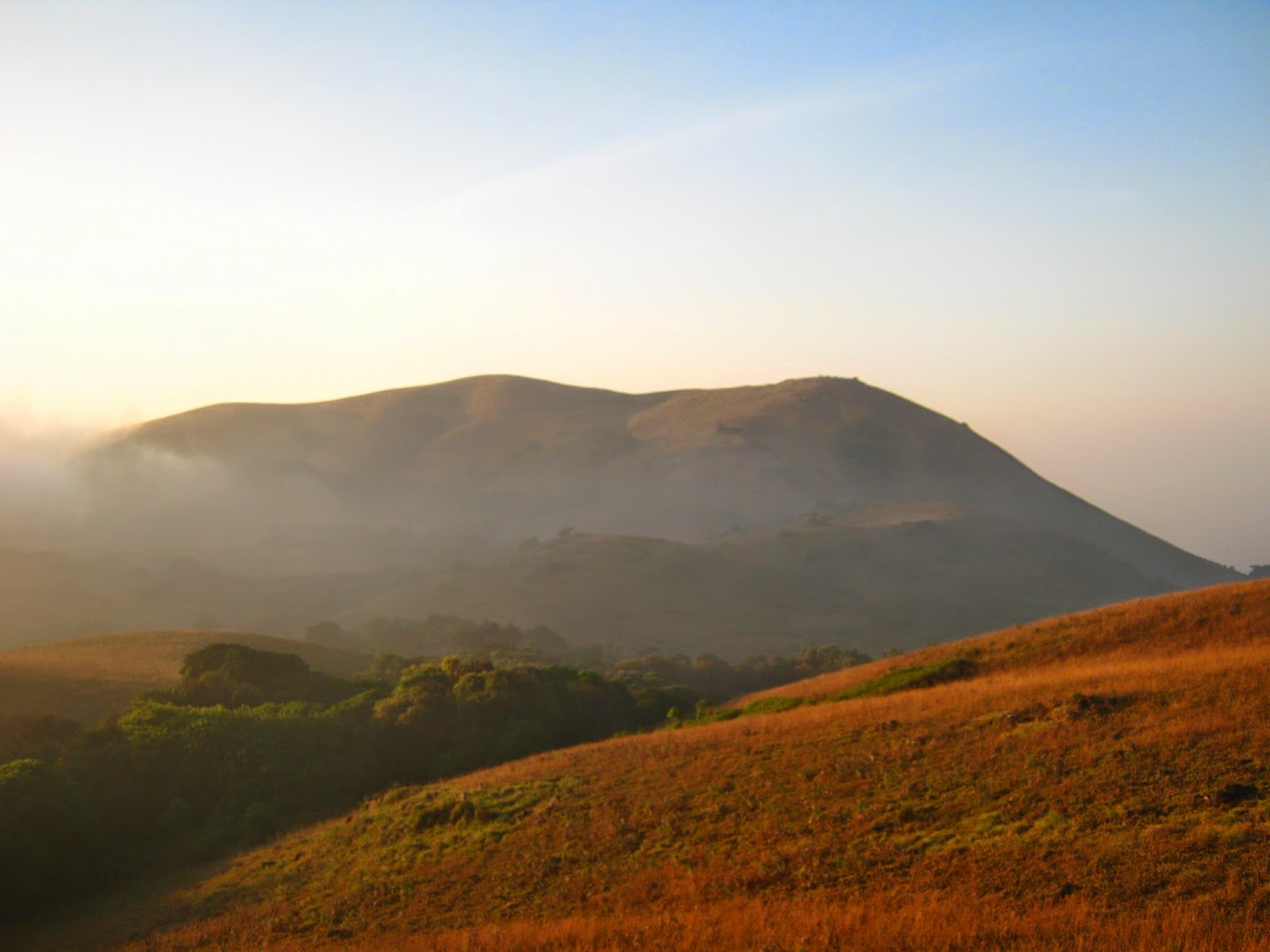 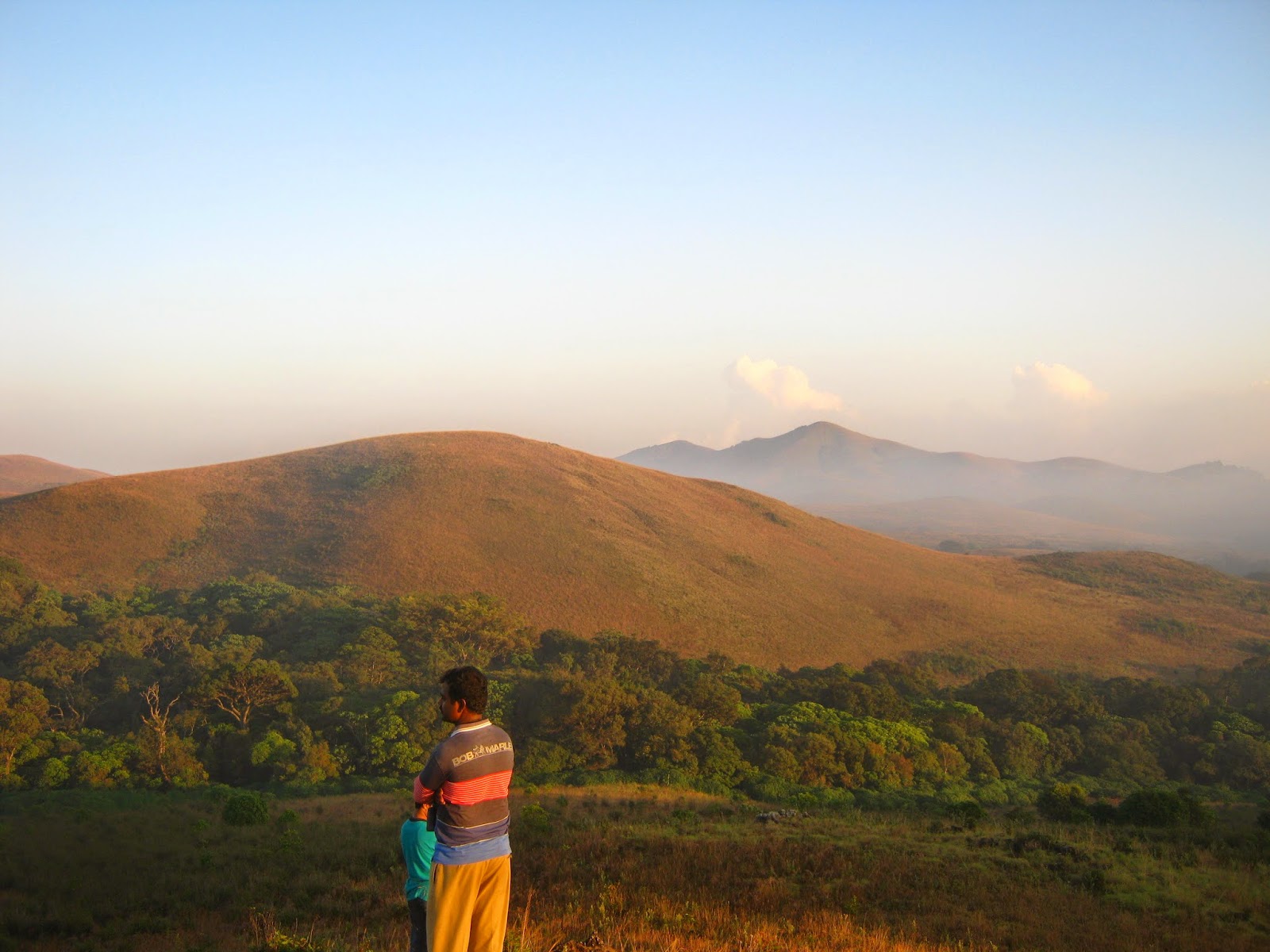