( OTHER BLOGS ARE AT END OF THIS PAGE)
"Elli Agumbe na??Miss madkonde!! ", lamented one of my friend when i told him that we had been to one of the wettest places in our state, even country too.. Agumbe doesn't need much intro as we all have been hearing the name since our school times.
It was long time yearn for me to go trekking in monsoon, which i never did so far..Hence I decided to trek Narsimha Parvata in Agumbe , this rainy season. 5 of my friends, very much naive in trekking agreed to join me.
Before starting I called DODDAMANE(Kasturi Akka) for stay and also telephoned guide for our trek, both were readily available.It's better to arrange for both before hand, because Agumbe is small village, no much staying facilities are available.With both accommodation and guide confirmed,there was no   apprehension about staying and trek route, and thus we were off to "cherrapunji of South"..
Many private buses ply between Agumbe and Shimoga, connectivity to the place is good, buses start from morning 5.30 itself. So reaching Agumbe should not be a problem. If you have own vehicle it is a bonus, else you can rely on public transport. But see to it that you are not waiting for bus late evening  as bus frequency reduces after 5 pm.
We reached shimoga at 6.00AM and hopped on to a private bus to reach Agumbe at 9.00 AM. Since it being morning time, we spotted scores of deer and peacock besides the road, on journey from Shimoga to Agumbe. It was nice to see deer in such huge numbers. 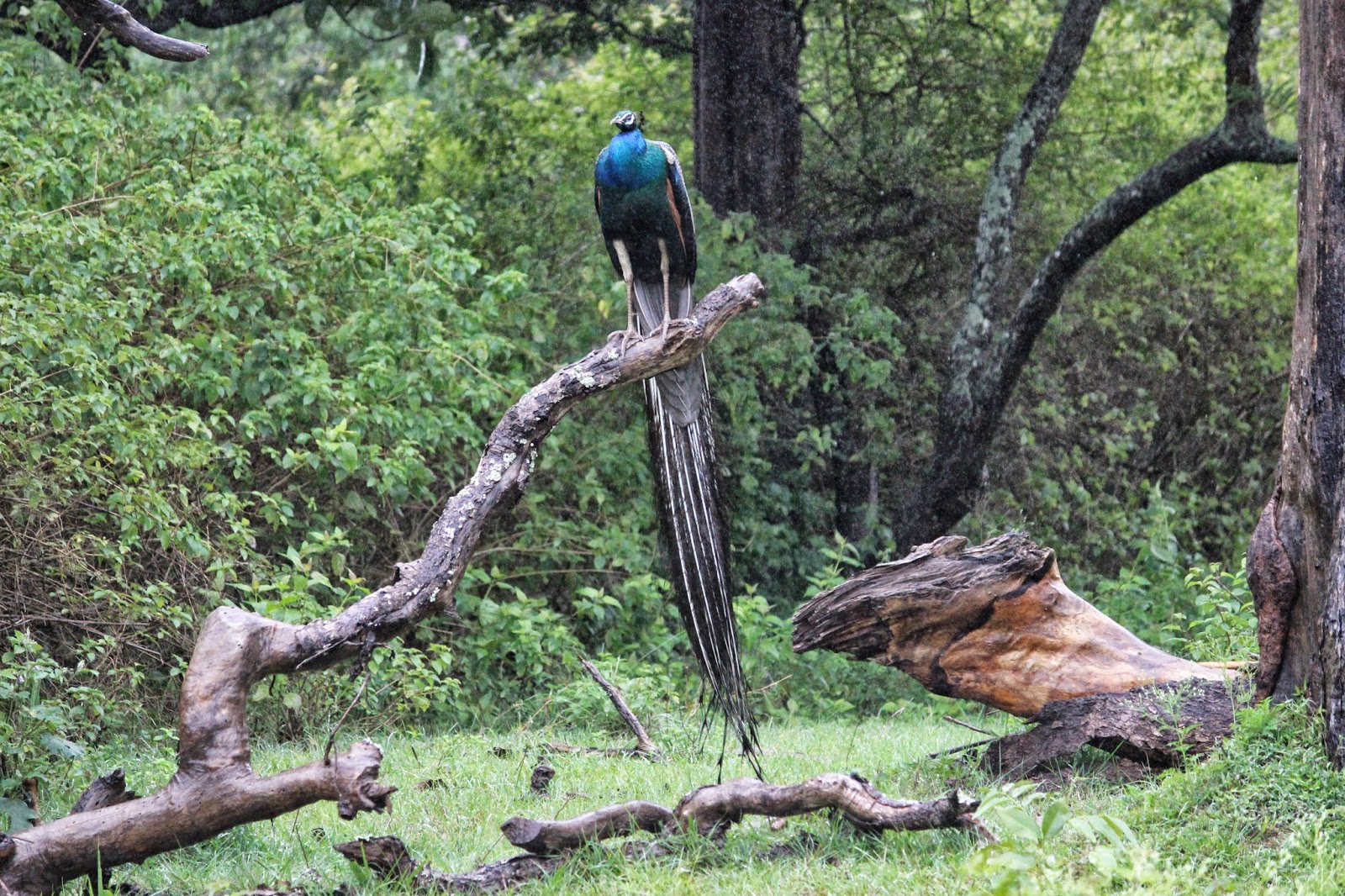 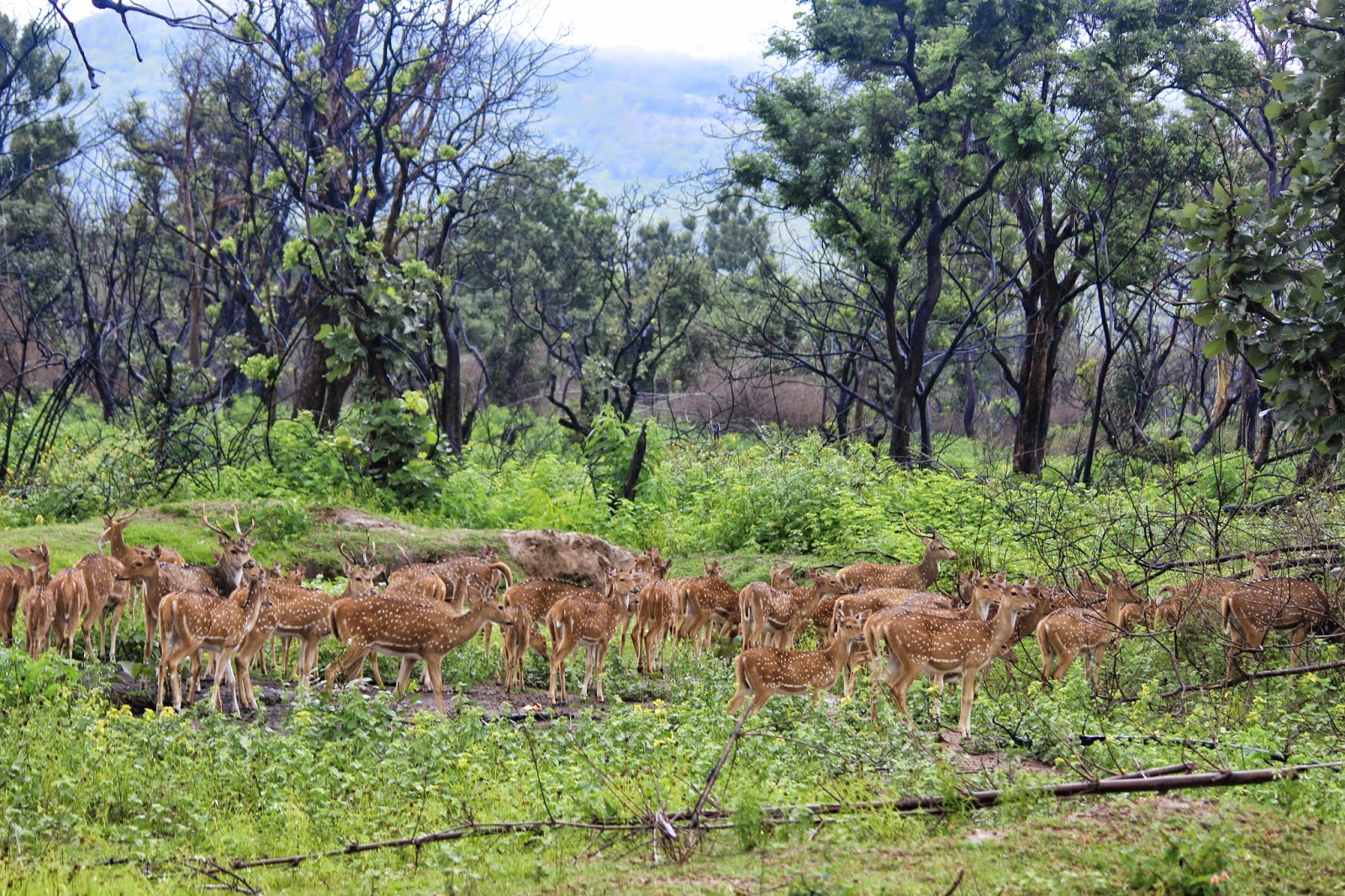 Thus we got down at Agumbe, the weather there was misty, cool, though it was initial days of monsoon, the place looked as if it is receiving  raining for past many days, fantastic climate, dense fog, green all over, road sides filled with overflowing puddles. No surprise why this place is so famous for its serene beauty. We asked local person about Doddamane, which is just 2 mins walk from bus stand. Doddmane is place where, some of the  famous episodes of "Malgudi days" were filmed, people born in late 80's and early 90's, all of us remember how fantastic were "Malgudi" series. The place refreshed some of our childhood memories. So, we reached Doddamane to be welcomed by Kasturi Akka in the warmest way possible.  Hospitality of Kasturi Akka is such that one feels as if you are in grand mother's home, and the food she prepares is 10/10.
So we freshened up, had our breakfast and left for Jogi gundi falls, later to ARRS and then to sunset view point to end our day.

Next day was for trekking, everyone was eagerly waiting for sunrise and start towards Narsimha parvata.
There are two ways for Narsimha parvata:-
1) From Kigga side - Kigga is around 35 kms from Agumbe and trek from Kigga to  peak is around 4-5 Kms. It takes some 2.5-3 hours to climb up and some 2 hours to come down. Guide may or may not be taken in this route as path is well traceable, its a single trail till the peak and same trail must be followed while coming down...
2) From Mallandur - Mallandur is  8-10 Kms from Agumbe, Trek from Mallandur to peak is around 10-12kms and it takes some 4-5 hours to reach the peak.Guide is a must on the Mallandur route, as there are many diversions and without a guide you may end up loosing you path. Don't attempt without guide on this route.
Generally people climb from Malandur side and get down towards Kigga side. We too did same..
There is a small 2 room shelter at the peak, where you can stay for night (Absolutely no amenities in rooms).Localities along with department have made a committee, which works towards conservation and betterment of the place. It is mandatory that you take permission from the committee before trekking from any side. It can obtained from Agumbe forest office. We had  called  guide 2-3 days prior our journey, hence he had obtained permission for us before hand. Our plan was to trek from Mallandur side, stay at the peak for the night,(in the 2 room shelter), and come down next day from Kigga side.Another interesting thing is we cover 3 districts i.e Shimoga, Udupi and Chikmangluru while trekking Narsimha Parvata!!

So, on the trekking day(2nd day) we woke up early and left Agumbe to reach Mallandur, in auto, at 8.30Am, where our guide was waiting. He told us about do's and don't's, especially for my friends who were 1st time trekkers. We laced mixture of "Haral Enne "(Caster Oil) and "NASHI PUDI" to our legs, socks, shoes, so as to avoid LEECHES!!, and it works quiet efficiently, number of leech bites were less, thankx to mixture of  oil and powder.
Thus, with instructions from guide and post application of leech repellent we started our trek towards Narsimha Parvata at    9 AM.  To avoid the over enthusiastic crowd we selected week days, (Tue and wed)for our trek, and it turned out to be fruitful because the day we climbed the peak there we no other trekkers!!.... Initial path traverses through very dense forest, and via river path, so we need to jump through many boulders. Initially its a descent route through thick forest and needless to say amid many many leeches. We covered this starting distance quickly as path moves downwards..After
some 45 mins into trek we need to cross river stream (Sita Nadi) .If it rains heavily then, guide told, permission to trek from Mallandur side is denied, as river becomes very rough and crossing it becomes a very risky affair. Once you cross the river the climbing begins and also leeches get left behind because leech are found only at edges of forest. Climb till peak is gradual one, initially through dense forest which opens into vast grass lands later. On clear day, the view of open grassland looks astounding, but the day we trekked the entire region was covered with thick blanket of fog and visibility dropped to even less than 20Mts. So we all had to stick very close to each other so as to have each other in sight, else finding a lost one in thick fog is very difficult. Path to peak is gradual climb, a little tiring one but can be managed with small breaks in between. We had carried eatables along with us, so they were emptied one by one as we moved up. Thus we reached peak at 1 PM, some 4 hours post starting. The view around is just mesmerizing, no words to explain. The mist starting playing hide and seek game, whenever it gave way for clear view, we could see green color of forest and grasslands extending till the horizon. Very beautiful view. One can just spend hours and hours together enjoying nature's beautiful creation. We explored near by area and spent some time at the peak. Fresh air, cool breeze, white mist with green cover all over, and occasional sound of unknown birds, made us fall in love with place.


View from top of peak 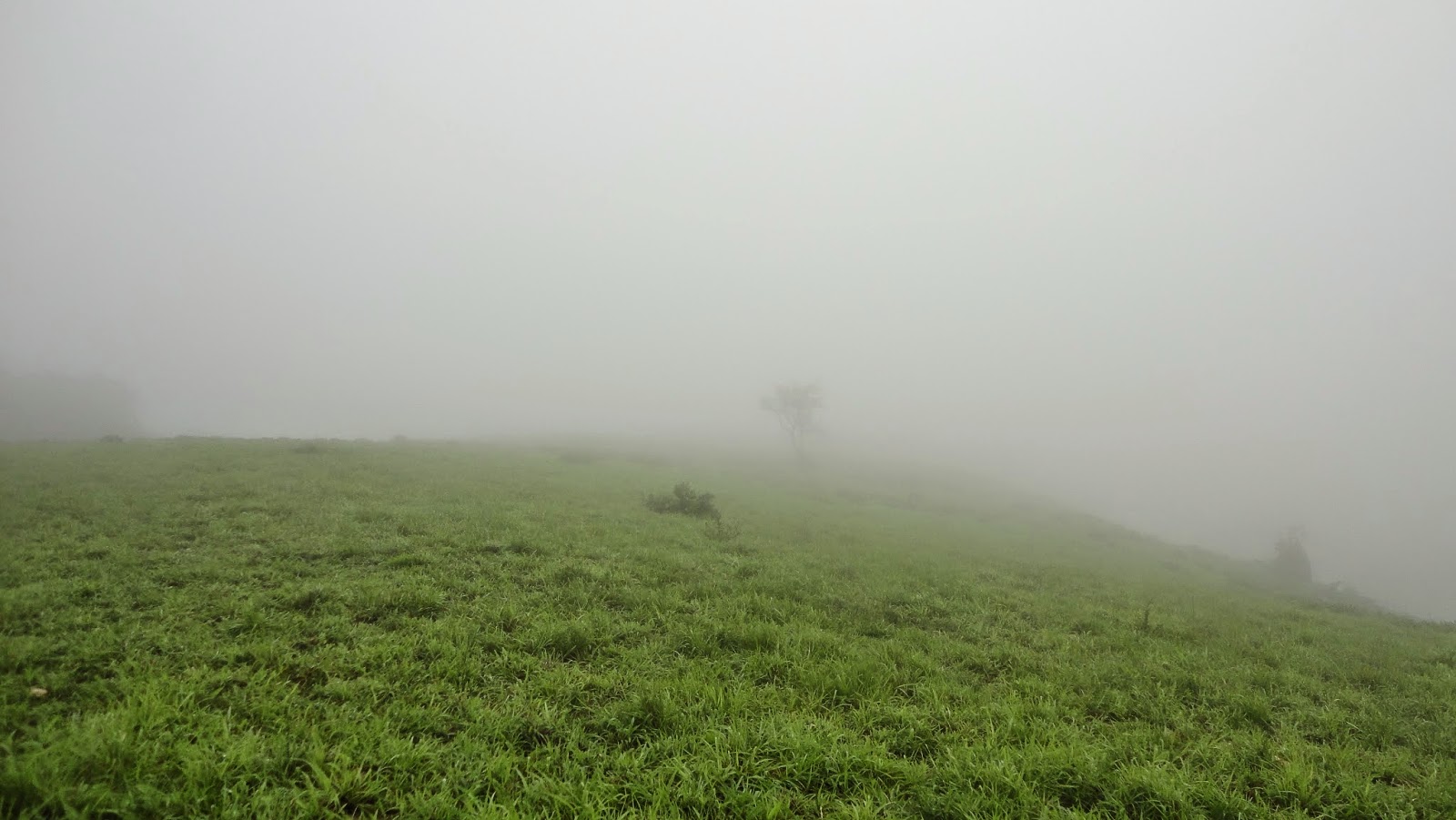 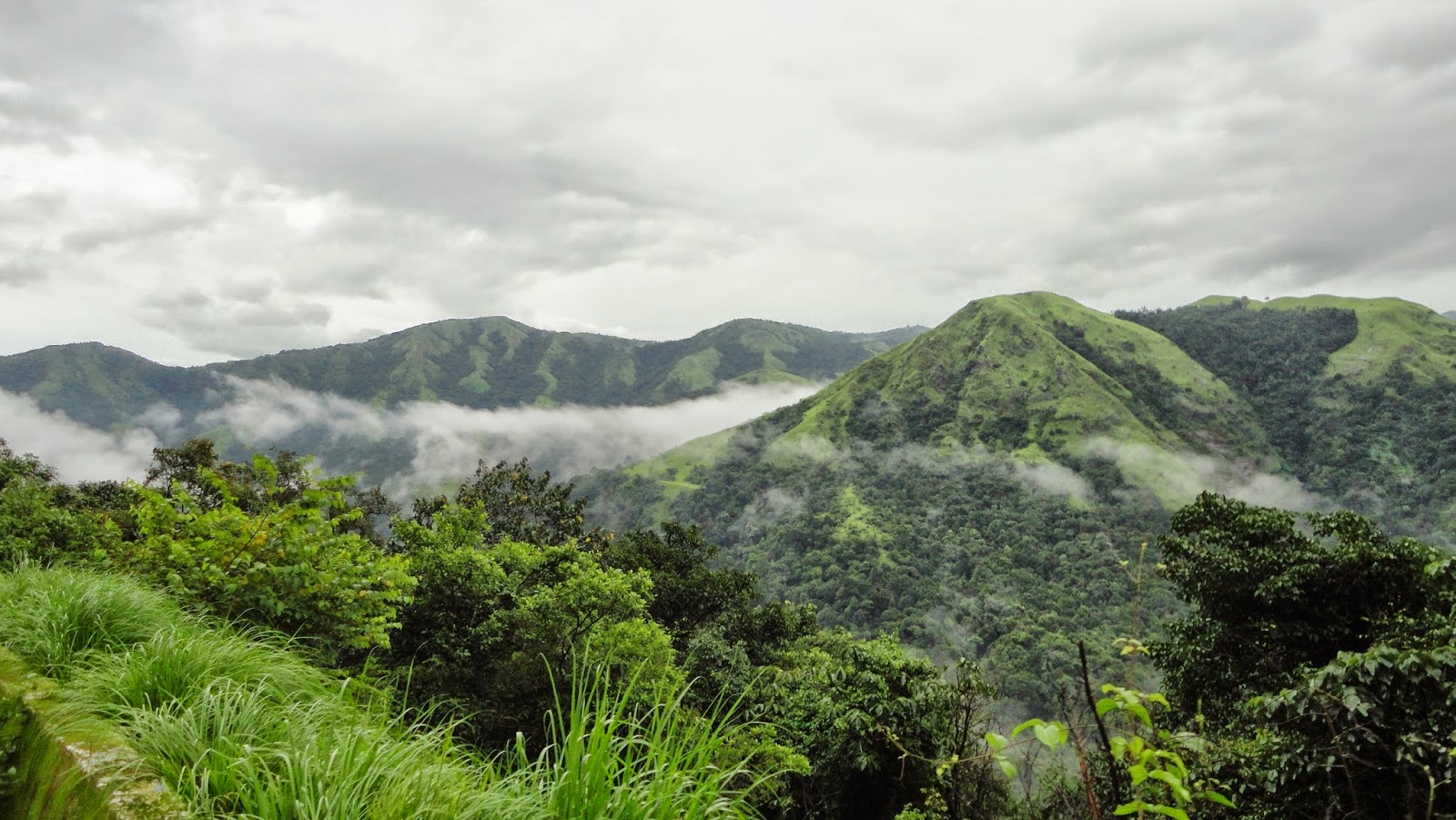 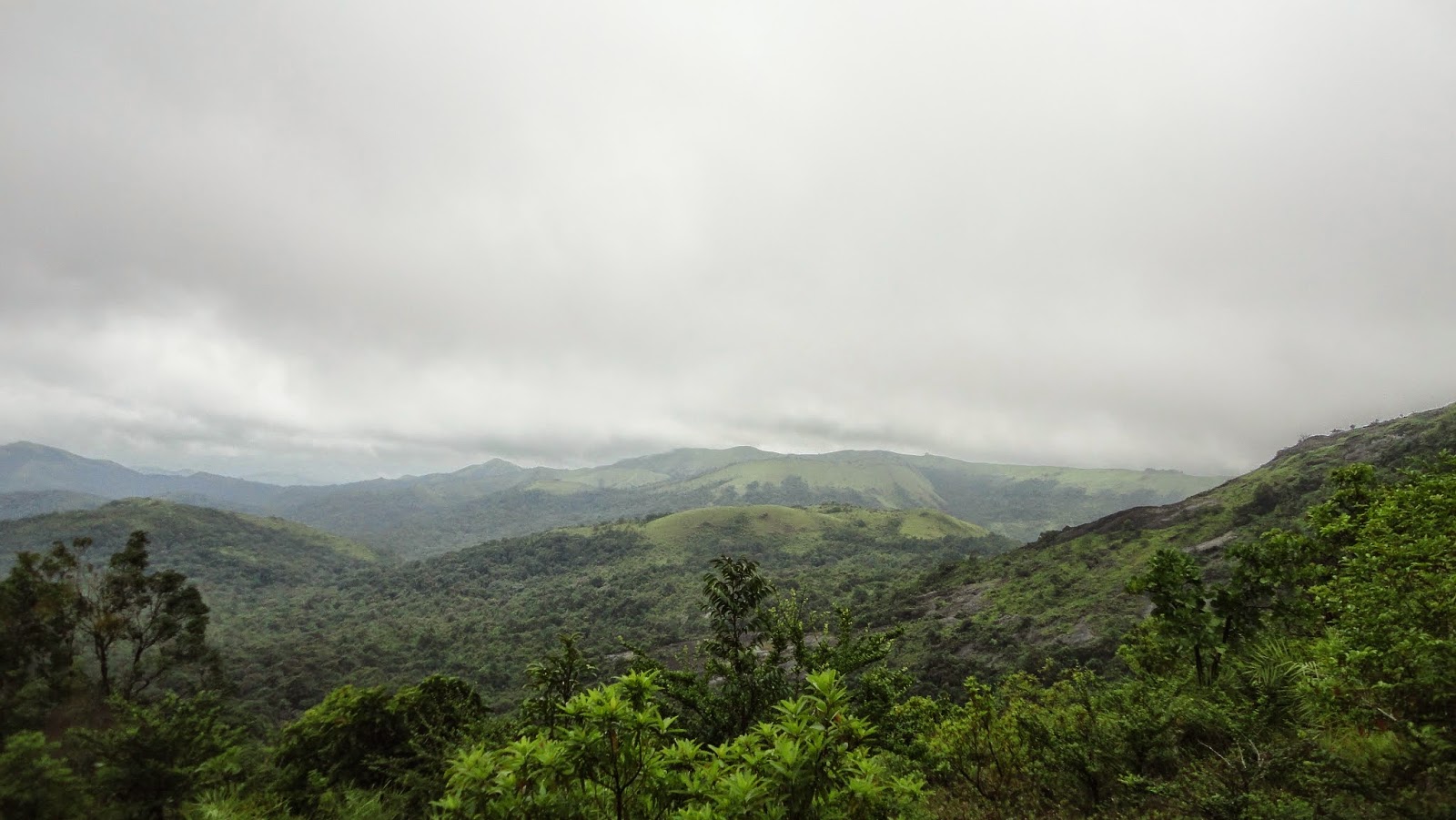 As we reached peak, we went in 2 room house, only to find that it was completely drenched with water and some of its roof sheets blown off due to heavy wind. We hence abandoned our halting plans at peak and decided to climb down same day.
There is a small stream which flows near the room, so water should not be any problem. Make sure
you carry enough water from base till the peak as there is no water once you cross the river path. We had our afternoon lunch at the peak, which we had carried along. If you are staying at peak then one can see both sunrise and sunset, which is very beautiful sight. One of most adorable things was that rain gods showed mercy on us, and it did not rain in our entire trek till the peak. Thus staying for more than 2 hours at the peak we started our descent towards Kigga. The route back is easier one with continuous climb down via visible trek trails. Half way into the descent, it started raining heavily. We had no option else than getting ourselves soaked in rains. The jackets we carried were of little help against the heavy downpour, since we were exiting forest, once again we encountered leeches along with heavy rains!!..phew.. double whammy...But  we manged to cover this 4-6 Kms in less than 2 hours and reached Kigga. On reaching Kigga,at around 3.30Pm, 1st thing on everyone's mind was to get off blood sucking leeches. Thankx to oil powder mixture, they were very less than expected. We got them off and boarded bus to Sringeri, which is only 11 Kms from Kigga. There is a "Sirimane" falls, very near to Kigga, where you can freshen up. Since we were already drenched in downpour so there was no point for us to take bath again.
Thus reaching Sringeri, we visited Sharadamba temple and stared our journey back home..

For those who don't want to trek more, you can climb up and down both from Kigga side, guide here may also be not necessary as path is clearly visible. Ask localities for starting point and proceed
upwards till the 2 room building, then return down via same path. But if you are trekking from Mallandur side, don't at all do mistake of climbing without guide, the path is very tricky with many deviations..
If conditions are favorable then you can stay atop either in rooms or in tents(which you must carry  along). It gets too cold at night so be well protected against cold and don't at all wander at night or late evenings, its dangerous place with King Snakes!! I guess name of snake itself is enough to get goosebumps!!

Narsimha Parvata is a very beautiful place which is still clean without much littering, the lush greenery of place is bound to attract many people. But please be a responsible tourist and don't disturb the tranquility of place, because i saw many broken glass pieces of alcohol bottles and plastics near the building, which along with spoiling beauty also posses risk to wild animals which use this stretch.

Trekking in  monsoons was a great experience, although the encounter with leeches was horrific but memorable one. If one has to explore true beauty of our western ghats then trekking in monsoon should be ideal way of doing that, provided you've taken all precautionary measures...

Quick Cheks :-
1. Narasimha Parvata, actually comes under  Kudremukh range.
2. Permission from forest dept is must, it can be taken at Agumbe.
3. Two ways to trek the place
a) Via Kigga, which is easy and even near. Guide may not be not be reqd on this route
b) Via Mallandur, Which is a bit long and tiring one and needs more time. Guide is a must on this route.
4. Need to cross a river stream in between, which can be risky during heavy rains.
5.Two room building is at the peak, but most of times its in unusable condition due to water logging.
6. Call guide well in advance.
7. Please be responsible tourist and do not litter the place. 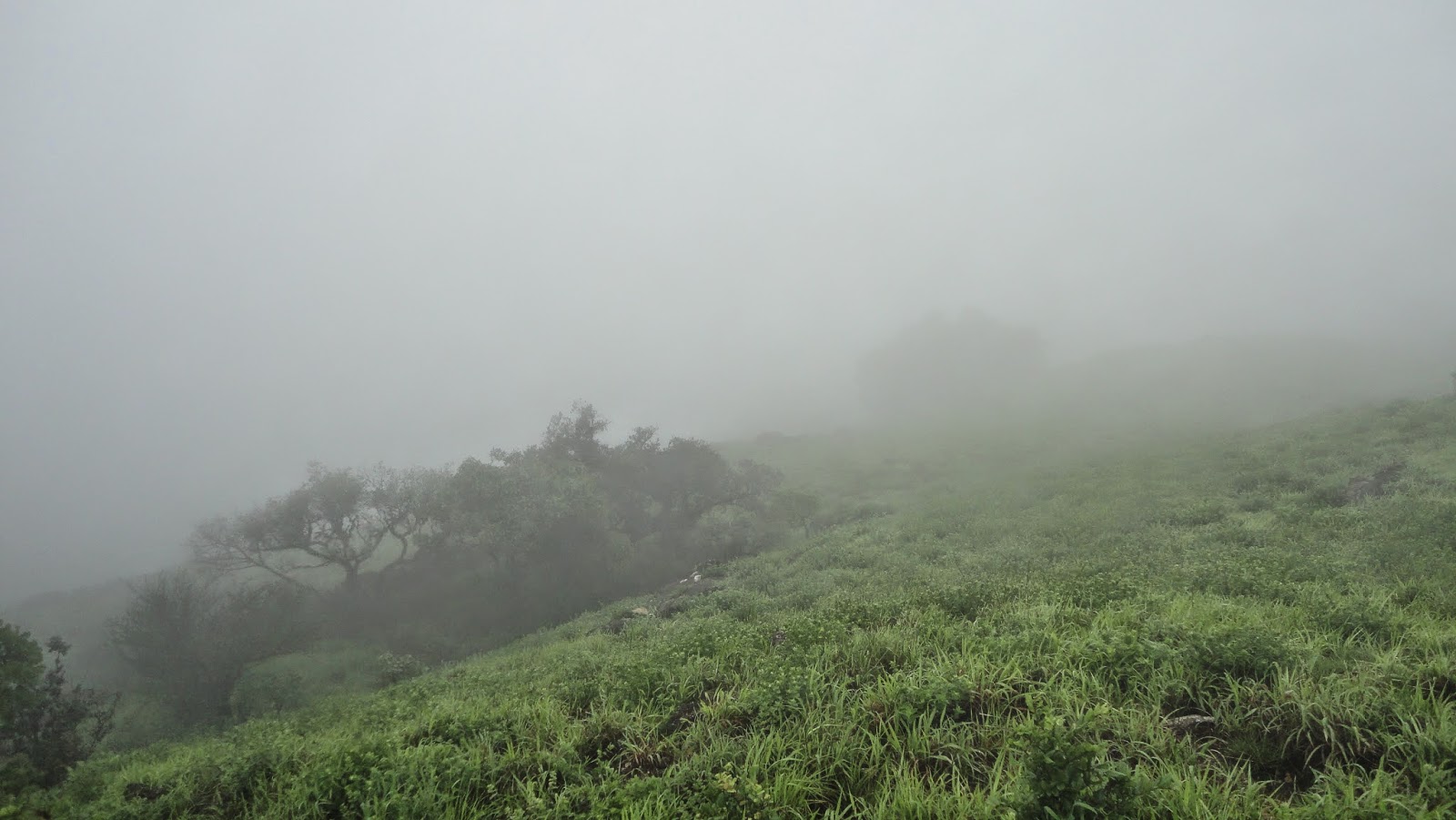 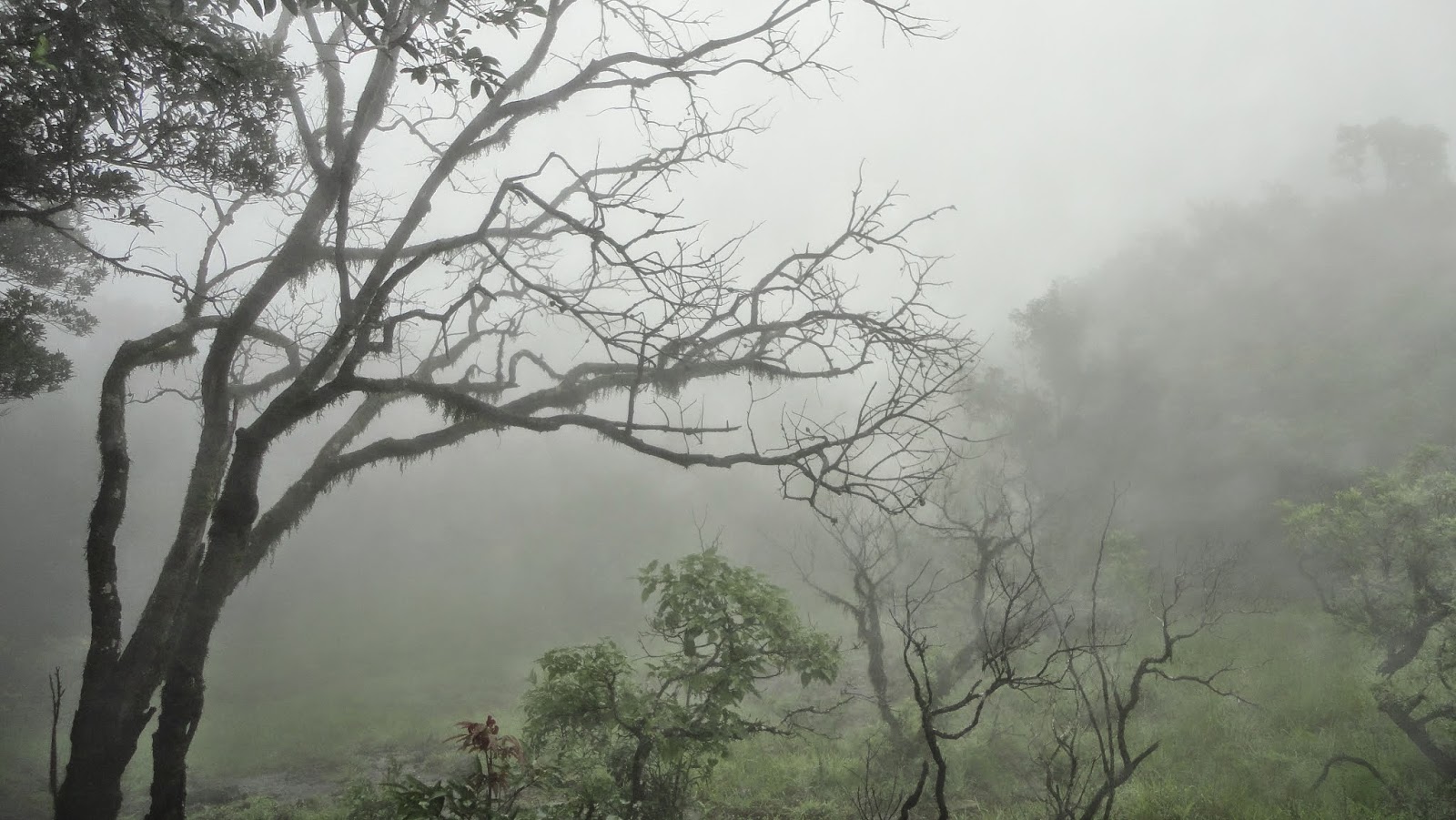 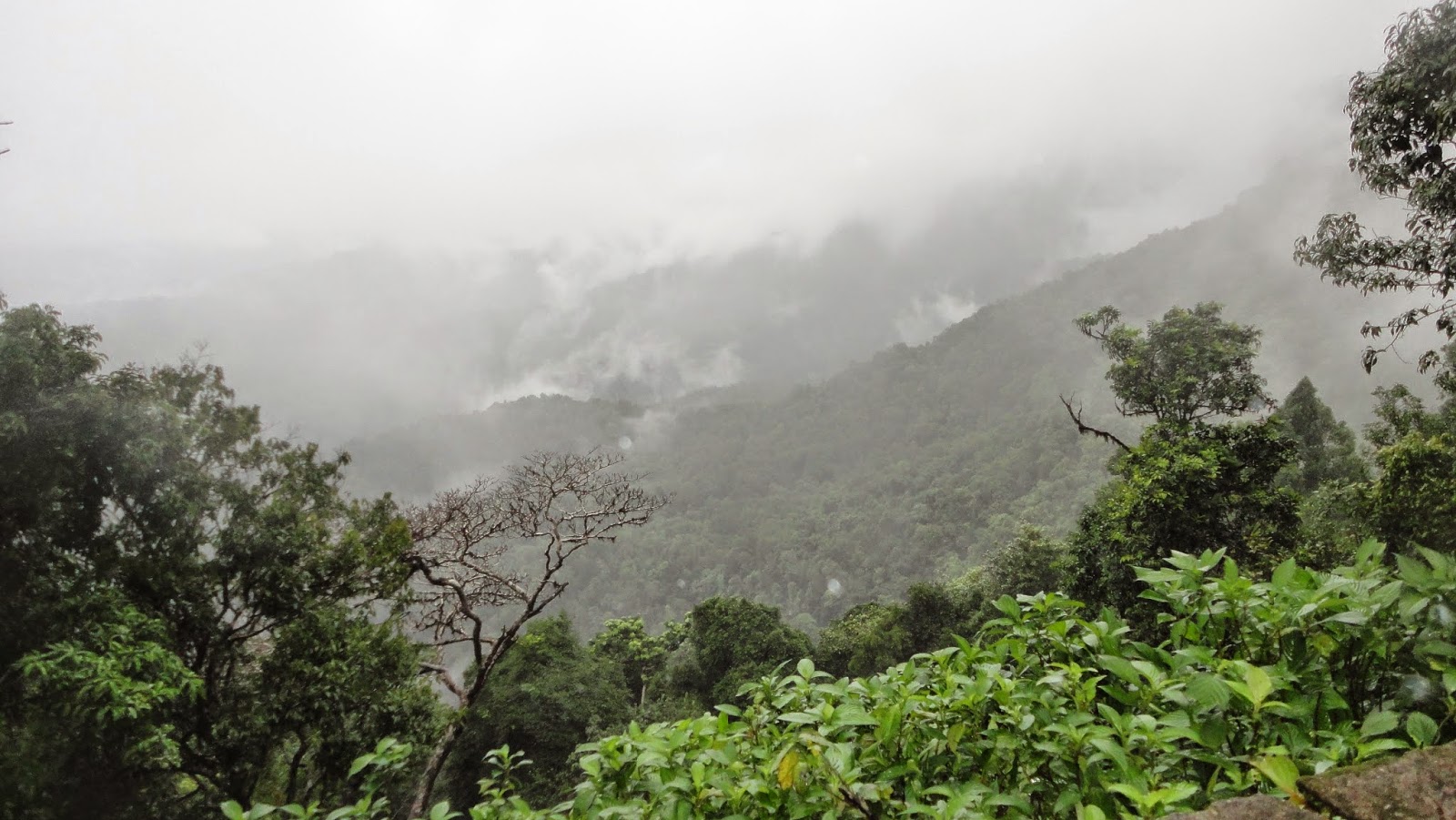